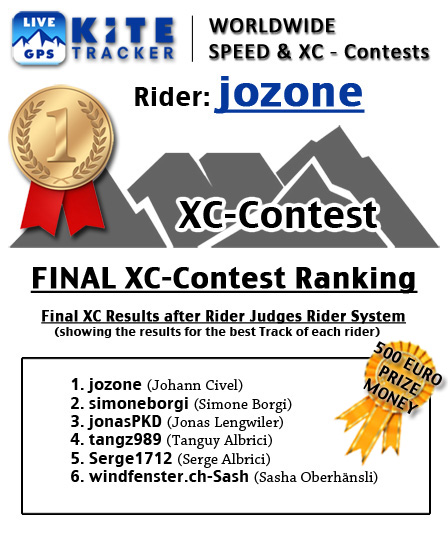 The final KiteTracker XC-Contest Ranking of 2016! Congratulations to all final contestants and their awesome tracks!
There have been many interesting and long tracks – and like the XC-Formula has been designed, not every track in the high mountains.
So the system worked and everybody had a chance to compete, no matter while kiting in flat areas or tracking so many gained altitude meters in the mountains.

In the end – it’s being decided by the riders between each other, to which rider the victory belongs! Each rider of the top 10 XC-tracks can vote for every other track.
Points from 0-10 can be voted for every track and the average of all the votes will be multiplied with the original XC-Points – > this new number will define the final ranking!

did it!! With his awesom RideUp Session, he did a good base for his original XC-Points and the other riders judged him to an average of 8.0 points – together with these two numbers, he has a good margin to the 2nd place! Congratulations! 500 Euros for you as cash prize Johann Civel

Note: only the best tracks of each rider is shown, therefore only 6 final tracks in the ranking….
For detailed infos about the rider judges rider result : write us on info-at-kitetracker.com

The area around Haugastol in Norway has been THE place for so many showdowns, battles, movies, Events – and not just because of no reason…
Perfect conditions for almost any competition – and Jonas took this chance to bring home the Snowkite speed contest – it was hard and took a long time in a session with many attempts to gain for maximum speed.
Whopping 7 hours and just below 150km took him with his Ozone R1 V2 in good conditions to get this years record of 107km/h! Go on Jonas!!! 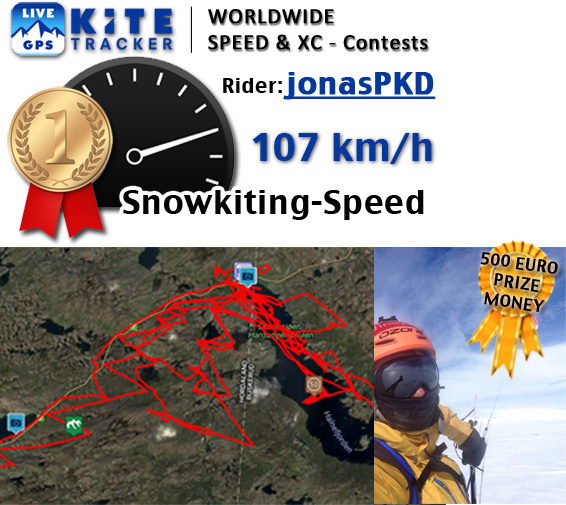 French rider Froggy aka Olivier is tracking a lot of sessions along the southern coast of France – mainly Beauduc and got lucky with enough good days to fight and fight for the fastest track.
Wind blowing around 25kts and boosting his FS Speed 5 9m with a custom board – those were the basics to set the record for this year! Good job Froggy!

Congratulations Froggy to one of your many tracks with the fastest speed!
Froggy’s 62km/h track here: http://www.kitetracker.com/gps/tracking?r=Froggy_16e 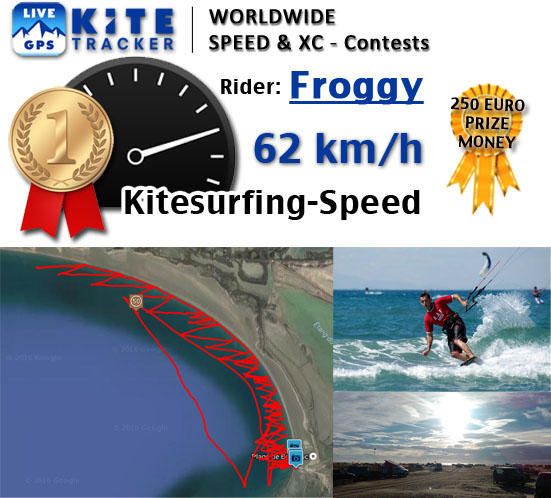 A well known KiteTracker user (thanks to so many tracks) from the western part of Switzerland did the longest Kitesurf-Track in 2016!
Serge1712 – huge respect for your endurance on the foil! It must have been an endless session and never ending day for you, always foiling, but congratulations for this epic track! 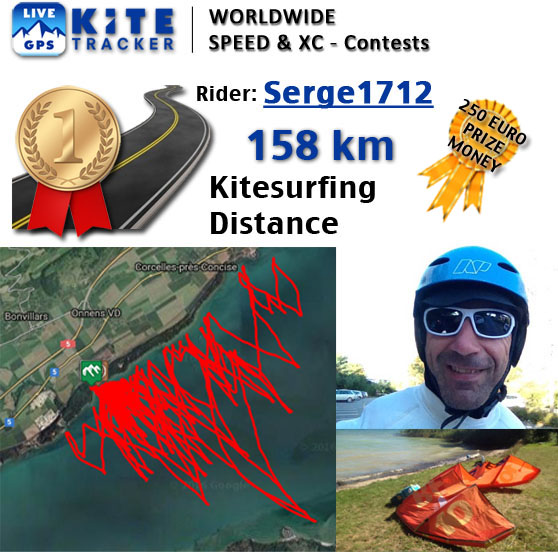 There was always a fight between KitePascal and MichaH. about the Buggy-Tracks and again this year - Micha did it, fought for it and made it to the top with insane 351km on the buggy!!
The conditions were not perfect and many kite changes were needed to fullfill this achievement! Nearly 10 hours of kiting! Biiiig respect Micha!!!! 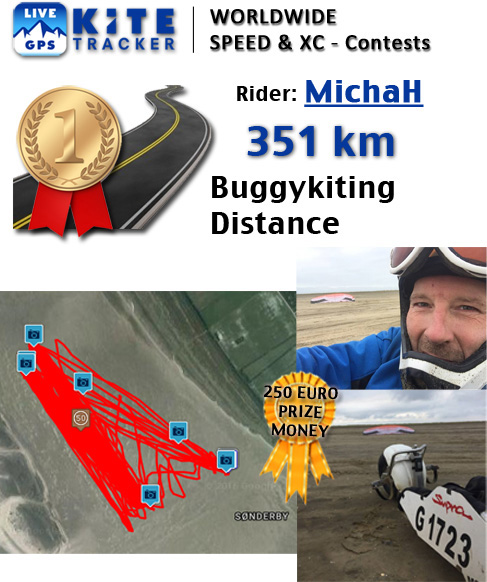 Our fellow KiteTracker user Daarum, which is using our app a lot and sharing his kite adventures (thx to you!) did it this time with a nice landboarding session and made it to the top for the landboarding distance record! 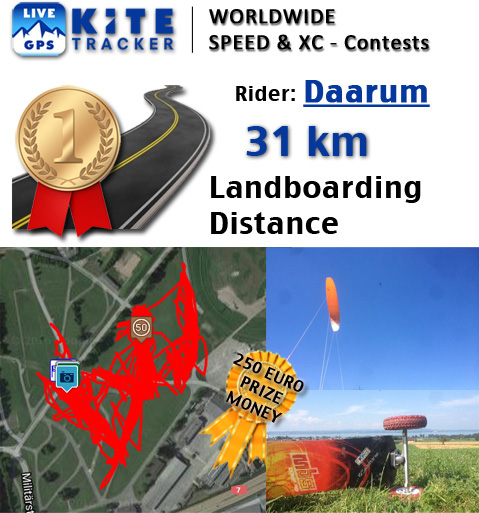 Landboarding and Buggykiting Speed Contest
Looks like Flysurfer Rider Pascal Lohmann remains one of the fastest buggy and landboard riders!!
Good, hard sand conditions with around 25kts of wind and his 6m FS Sonic, combined with his skill brought this honest result!

Congratulations Pascal to your 77km/h on the landboard!
Pascals 77km/h track here: http://www.kitetracker.com/gps/tracking?r=kItepascal_10 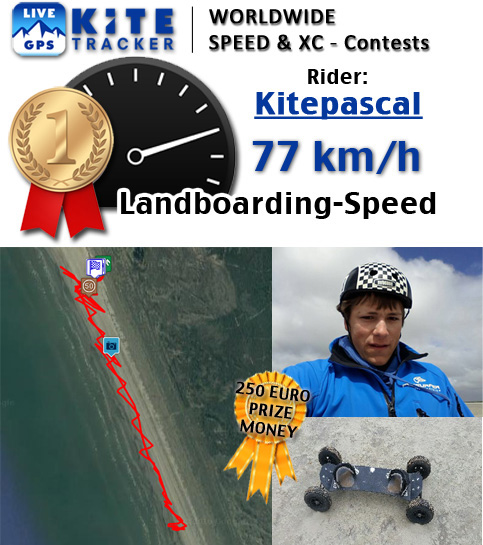 And the other day, Pascal also went for the record on the Kitebuggy with impressive  96km/h!! Crazy and big respect for this speed!!
Same setup as for the Landboard-Speed-Session – steady 25kts with FS Sonic 6m and amazing buggy skills by Pascal!
Congratulations also 96km/h while strapped to your speed buggy!
Pascals 96km/h track here: http://www.kitetracker.com/gps/tracking?r=kItepascal_9 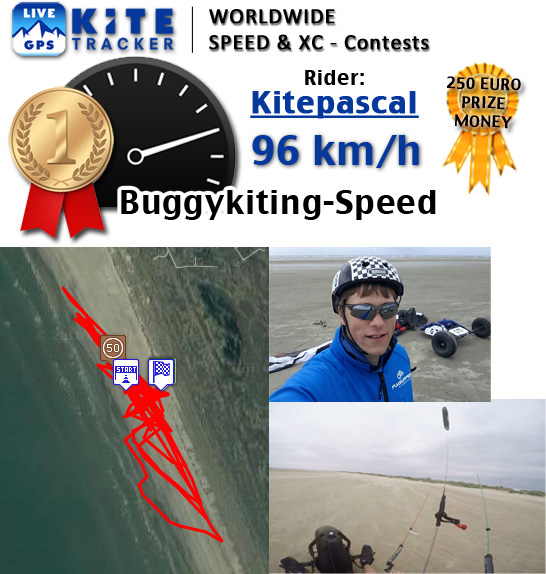